Burning wood and biomass creates fine dust, carbon monoxide (CO), nitrogen oxide (NOx) and organic gaseous compounds (OGC) that are detrimental to people’s health. Particulate matter containing particles below 1 μm is especially harmful. This is why measures to reduce emissions target the combustion process itself early on: Controlled combustion reduces primary emissions. In addition, filter technologies are used. These filters, also known as separators, can be active or passive.

A common type of electrical separator is the electrostatic separator. Its separation efficiency is over 90 percent, based on the number of particles, and it can even tackle nanometer-sized particles. Building on commercially available electrostatic separators, Fraunhofer IPM is developing solutions for fine dust separation – both for retrofitting existing systems and to be integrated into new systems.

An even higher separation efficiency of over 99 percent – even for ultrafine particles smaller than 0.1 μm – can be achieved with novel low-energy plasma separators. These boast a higher power density and ion concentration in the separation zone than conventional separators as the system operates above breakdown voltage.

Fraunhofer IPM has been developing plasma separators for various applications, including separation systems for biomass. Initial feasibility studies using a commercial pellet stove demonstrated a particle reduction of over 99 percent.

IPM offers self-cleaning devices for both types of electrical separators, which autonomously remove deposits of separated particles from the system.

Thermoelectric generators (TEGs) use heat flows to generate their own electricity. They make use of semiconductor material that converts heat into electrical energy thanks to the thermoelectric effect. TEGs are durable and reliable and can be operated even in very small spaces. Integrating a TEG into the flue gas train can generate enough electrical energy to operate a fine dust separator and a combustion control system on top. This means that the entire exhaust gas treatment system is able to operate without power connection.

Fraunhofer IPM offers innovative concepts for particle separation and the reduction of emissions. 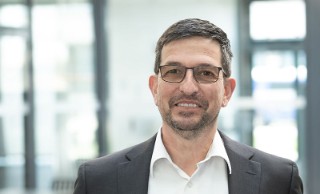