Thermoelectric generators (TEG) convert waste heat directly into higher-value electrical energy, and they do so noiselessly and without moving parts. Waste heat is generated in large quantities in numerous processes. Today, it often remains unused for heat recovery. This applies, for example, to melting furnaces or industrial combustion and drying plants. In applications such as combined heat and power plants, which already use exhaust gas heat to heat water, TEG can be used to generate proportionately more electricity and thus increase the electrical efficiency of the plants.

From module to system: thermoelectric generators are robust, low-noise and low-maintenance

In thermoelectric systems, the actual carriers of the energy conversion are certain thermoelectrically active semiconductor materials. Connecting these materials and generating a temperature difference at the junctions creates an electric field. All compact thermoelectric modules (TEM) are based on this fundamental effect. A thermoelectric generator is created in conjunction with heat exchangers for hot and cold media and TEMs ‘sandwiched’ between them. These passive components have no moving parts, are virtually maintenance-free and can be easily integrated into existing systems due to their compactness. The systems are modular and can therefore be easily scaled and adapted for different waste heat sources.

The use of TEG in combined heat and power (CHP) technology is promising, e.g. for increasing the electrical efficiency of combined heat and power (CHP) plants. As part of various projects, complete TEG demonstrator systems have been developed at Fraunhofer IPM, tested on the in-house hot-air test stand and operated in field tests on CHP units. Half-Heusler high-temperature TEG modules manufactured at the institute and specially tailored to the application were used. Compared to other technologies for waste heat recovery, TEGs have particular advantages in nano and micro CHP units (P ≤ 20 kWel).

In the future, small combustion furnaces can be upgraded into small power plants by using waste heat with the aid of TEG. In addition to heat, such nano-CHP units will also generate electricity. It is also possible to convert waste heat, e.g. in the exhaust pipe of chimneys and tiled stoves, into electricity to enable energy-self-sufficient control technology, fine dust separation or connection to a smarthome network. We are currently researching this topic in the project »BioFfit - Making Biomass Combustion Fit for the Future«. The aim is to use thermoelectric technology to generate sufficient electricity for controlled combustion and the use of a fine dust separator in the typical power range of wood-fired-stoves – thus significantly reducing emissions from these small combustion plants.

Thermoelectric generators can also be used to convert very small amounts of energy into electricity for measuring and transmitting sensor data. This includes, for example, IoT applications.

As a retrofit solution for wood combustion plants, a demonstrator for an air-cooled thermoelectric generator (TEG) with heat pipe heat exchanger was developed.

By converting part of the residual heat in the exhaust gas stream, 20 W electrical power can be generated at 12 kW heating capacity. Depending on the operating point, this power can be used to cover the power requirements of an additional exhaust gas cleaner (e.g. an electrostatic fine dust separator), for example, so that connection to the power grid is no longer required.

Wood combustion plants can be upgraded into nano CHP units by means of directly integrated TEG. To demonstrate this, a water-cooled thermoelectric generator (TEG) was developed at the institute for use in the combustion chamber of a pellet stove.

More than 100 W of electrical power could be generated at a nominal load of the stove (12 kW heating capacity) using this TEG. Depending on the operating point, this is sufficient to cover the stove's own power requirements and, if necessary, those of other electrical consumers.

We provide measurement technology and know-how for characterizing thermoelectric modules with regard to efficiency, long-term stability and thermoelectric properties.

Learn more about the institute’s know how in thermoelectric waste heat recovery. 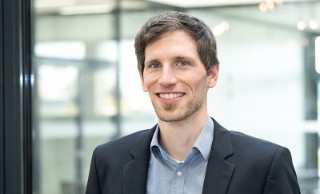