On April 1, 2017, Prof Dr Alexander Reiterer, Head of Department at Fraunhofer IPM, took up the professorship for »Monitoring of Large-Scale Structures« at the Institute of Sustainable Systems Engineering INATECH at the Faculty of Engineering of the University of Freiburg. Key topics will be the long-term monitoring of artificial and natural objects with the aid of multi-sensor systems. It should provide information on environmentally induced changes on engineering works, dams, hillsides or large areas of vegetation and thus facilitate the detection of possible geohazards at an early stage.

The main focus in research and teaching is on new systems for the detection of 3D shapes and geometries which can be used to monitor large objects and infrastructure. The further development of measuring systems and the development of innovative methods for automated data analysis and interpretation take center stage. In future, laser scanners, 3D cameras and low-cost sensors, merged into multi-sensor systems, will generate even more precise and at the same time temporally and spatially highly resolved measurement data of large surfaces. Special attention is therefore to be paid to the harmonization of systems and data analysis: What influence do certain system specifications have on the data set acquired? How can information on the sensor design be used to avoid misinterpretation of data? »With mobile systems, the boundary between the location of the sensor and the actual inspection of the object is becoming increasingly fluid,« explains Reiterer. »Within the scope of the professorship, we are working precisely at these interfaces.« The aim of the research work will be to establish integrated process chains for the monitoring of large-scale structures: from selecting the sensors through their linking with additional components, data merging, right up to the calibration of the whole system chain.

Reiterer has extensive experience of the application of 3D measuring systems on road and rail from his work at Fraunhofer IPM, where he will continue to work as head of department. Mobile autonomous platforms such as UAVs (unmanned aerial vehicles) or robots as carriers for these measuring systems will gain importance in the future.

Infrastructure elements such as tunnels, bridges, roads or railway lines are inspected regularly for safety reasons. However, the importance of long-term monitoring of natural large-scale structures such as dams, hillsides or woodlands is growing, too. The regular recording of their geometry can provide valuable insight into imminent changes and therefore contribute to understanding the environment. Influences such as temperature and precipitation play a major role in this. Techniques for modeling these complex processes will also be part of the work in the scope of the professorship.

Strengthening ties with the University

Alexander Reiterer, born in Italy, studied geodesy and geophysics at the TU Wien (Vienna University of Technology) and obtained a doctorate there under Prof Heribert Kahmen and Prof Thomas Eiter with his thesis on »A Knowledge-Based Decision System for an On-Line Videotheodolite-Based Multi-Sensor System«. Research visits took him to Switzerland (ETH Zurich, Institute of Geodesy and Photogrammetry, Prof Grün) and to Canada (University of Calgary, Department of Geomatics Engineering, Prof El-Sheimy). From 2011 to 2012, Alexander Reiterer was a scholarship fellow of the Alexander von Humboldt Foundation at the Technical University of Munich (Prof Thomas Wunderlich). In 2013, he obtained his habilitation (higher doctorate) in the specialist field of »Applied Geodesy« with his thesis on the topic »Novel Observation Concepts for Image Assisted Total Stations in Applied Geodesy – Development Steps and Applications«. In 2012, Alexander Reiterer came to Fraunhofer IPM as manager of the »Laser Scanning« group. Since 2016, he is head of the »Object and Shape Detection« department. 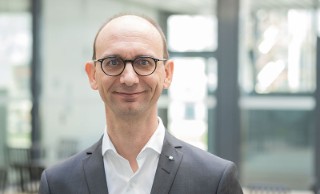